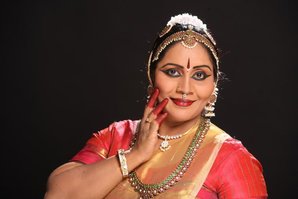 Kalaimamani Smt.Paravathi Ravi Ghantasala an acclaimed Bharathanatyam dancer for 3 decades, choreographer, teacher, and organizer, hails from a family of conniesseurs of fine arts.

Parvathi is one of the senior most disciples of eminent guru Kalaimamani Smt.Krishnakumari Narendran and veteran Padmabhushan Kalanidhi Narayanan.  She has an active concert career. \

​Parvathi perpetuates the beauty of Pandanallur style, marks   sprightly Nritta, involved Abinaya and a sincerity of purpose. Parvathi’s creation extended from her solo repertoire and productions to outstanding group choreography.Her thematic presentations reflect her intellectual approach, aesthetic sensibility and quest for the spiritual in art.
​
She has enthralled the audience with her solo thematic presentations and panoramic dance ballet on devotional themes, which were well acclaimed by the press and public. 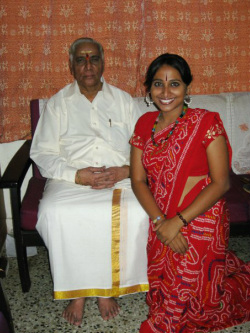 Bhagavatula Sri Seetarama Sarma was born in Kuchipudi, a village in Andhra Pradesh that is considered the birthplace of musical tradition and the Kuchipudi dance form. Belonging to a family of traditional artists—both musicians and dancers—his musical genius was nurtured in the gurukula system, which he entered into at a very young age. In 1961, he composed and produced a dance drama entitled “The Song of Harvest” for the summer drama festival in New Delhi.

His innate talent saw fruition during 23 years of service at Kalakshetra. He composed ballets in Tamil and Sanskrit for Smt. Rukmini Devi-Arundale: Meenakshi Kalyanam (Tamil), Ajamailopakyanam and Kurmavataram (Sanskrit). He has also produced musical operas for All India Radio (AIR). His compositions, like “Thiruneelakanta Nayanar,” have been produced as dance dramas in South Africa by Mrs. Bhama Mahalingam (an alumnus of Kalakshetra), and “Bhagavad Gita” in California by Mini Janislawski (disciple of Smt. Balasaraswati). He composed and choreographed “RITU,” which was presented by Kalapeetham students at I.T.I. Madras. He participated and worked in Paris with the world famous ballet choreographer and producer, Maurice Bejant, in connection with the festival of the 200th year anniversary of the French Revolution (1989). Sri. Sarma is a musician of high rank in classical music and composition, and an “A” grade musician of AIR-Madras for both light and classical music. Both as a concert musician and conductor of the ballet troupe at Kalakshetra, he has received high praise from the press all over India and abroad. His musical scores have also been greatly acclaimed. He has successfully established The Kalapeetham School of Dance and Music in India, U.S.A. and Singapore, and has produced accomplished graduates of both music and dance. Shankari has learnt Nattuvangam from Sarma sir, who is the first person in the history of Dance to develop a well structured teaching method for this great art.

​Smt. Vijayalakshmi is one of those few gurus available at today's age and time, who teaches music for art's sake. Shankari considers it as her good fortune to have found such a great teacher. Vijayalakshmi has an M.Phil from the University of Madras, she is currently working as a guest faculty at the University. ​ 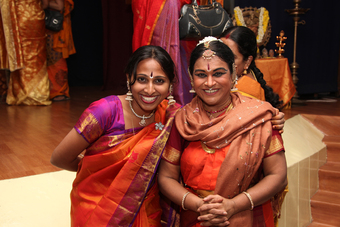 Smt. Bragha is a consummate artist. She has been a senior student of Adyar K Lakshman and Kalanidhi Narayanan and is renowned for her abhinaya. She is the quintessential Bharata Natayam dancer, totally immersed in the art of learning and in the emotional aspects of the music she portrays.

She has often played the lead roles in her teachers' dance productions and also teaches at her guru's institute. With many awards to her credit, she has given numerous performances in India and abroad.

She has participated in dance festivals in Chennai and has performed extensively in India, the United States, Canada and throughout Europe. She has made TV appearances in Belgium, Netherlands, Germany, Japan and on AsiaNet.

She has also conducted many workshops and lecture demonstrations. Her classes in Abhinaya, interpretation and choreography are eagerly attended by senior dancers, teachers and students.
Powered by